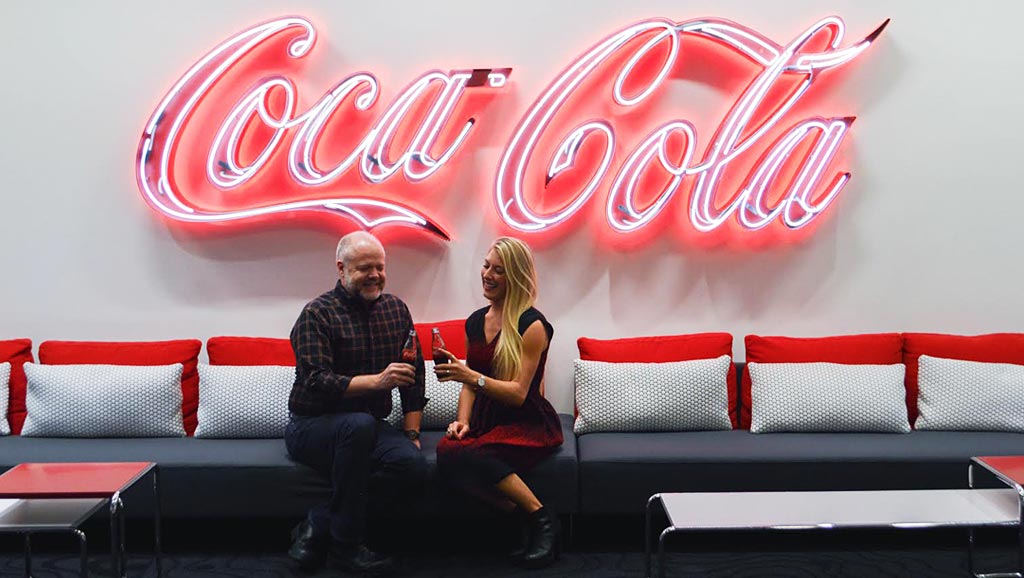 I have had the opportunity to visit the headquarters of some of the most well known brands in the world. These have included Nike, Wal-Mart, Harley Davidson, Starbucks, Sam’s Club, ABC Network, Segway, Tyson Food, NASCAR, Ben & Jerry, Universal Studios, and ESPN. Recently, I was lucky enough to visit another household name, Coca-Cola. Coca-Cola created an experience and feeling I will never forget. That feeling of happiness bubbled within me as I got a taste of what it looks like to work for one of the most well branded company’s in the world.

As I walked in through the doors of the Coca-Cola headquarters the sound of music filled my ears. At 7:30am the music was upbeat and high energy to get people excited for the day to come. The lightness and sense of playfulness felt deep in the soul through the sound was reflected into the design of the building. I couldn’t help but be impressed with everything I saw as I walked through the campus. Along the walls hung pieces of original artwork showcasing the Coca-Cola brand and hundreds of pieces of fine art by well-known artist. In particular, one wall featured an original painting that captured the artistic evolution of Coca-Cola as it moved from the original soda fountain to the can of Coke that line the grocery stores today. Other beautiful art pieces caught my attention, such as a beautiful sculpture made of recycled Coke cans and a waterfall that had the Coca-Cola logo running through the water to display Coke at its base.

“First and foremost, you have to know who you are. You have to understand what makes you tick and what doesn't make you tick. Don’t try to fit into a mold that is not you. Don’t try to be someone you’re not.” ~ Michael Moore

As I continued my tour it wasn't just the artwork that popped, it was the whole design of the Coca-Cola headquarters. Every detail of the building played into the brand of Coke. The tables and chairs were made from Coca-Cola’s recycled PET bottles and the counter tops were a Georgia Green hue giving a nod to the iconic contour shaped glass bottle. The color palette throughout the building was kept simple by sticking to the heart of their identity through using white with accents of Coca-Cola’s red.

My contact at the headquarters was brand expert, Michael Moore, the Senior Global Brand and Content Strategy Manager. Michael influences the look and the feel of the headquarters in Atlanta, Georgia and works to help maintain brand consistency and integrity in the workplace throughout the world. His job entails developing marketing tactics, planning art exhibits, figuring out digital content strategies, determining what visual images are going in the office space and even influencing the look and feel of the security uniforms on the campus. He helps make the Coca-Cola brand about more than just a logo and elevates it to an experience.

Prior to starting his current role, and to help celebrate the 100th anniversary of the Coke contour bottle in 2015, Michael traveled the world showcasing an exhibit that was both experiential and informative. The exhibit highlighted both the intrinsic and extrinsic attributes of the brand and featured artwork by pop artist Andy Warhol and Norman Rockwell just to name a few. The highlight was being able to share with the world pieces that you might only see in a museum and share it with people around the world and for free.

Michael plays a large role in bringing the brand to life in the workspace. He, and his team, curate exhibits that are purposeful, meaningful, and timed according to what is happening on the Coca-Cola campus and in society. For example, this past summer, during the 2016 Rio Olympics, an exhibit was set up at the headquarters that displayed the Olympic torches dating back from the last 20 summer Olympic Games. This was the first time that all the torches since 1936 had been together in one place. Employees and visitors were able to get a taste of the Olympic Games - past and present - as they walked Coke’s Atlanta hallways. They stood within inches of the torches that have carried the legacy of the best athletes in the world. This reiterated the theme of Coke using history as a compass to leverage it’s past in the present.

Every detail of the Coca-Cola headquarters has a purpose. I felt that purpose while I was there, not just with the things around me but what I felt within me. The space delivered a purpose to its workers by telling the brand story and paying homage to Coca-Cola’s incredible heritage that every person in the company makes possible. The brand's iconic history draws upon the vibrant energy of the organization and flows out to the people around them. The result is an environment for team happiness with the knowledge that they get to bring the same joy felt in that building to people throughout the world, through Coca-Cola.

The thing I love most about Coke is that it unifies people from all different regions, religions, and races. It doesn’t matter if you are the President of the United States or a small child in Mexico -when they put a can of Coke up to their lips they are both able to experience the same happiness through the distinguished drink. That stands true throughout the world. In fact, Coca-Cola means “Delicious Happiness” in Mandarin. On average, more than 10,000 soft drinks from Coca-Cola are consumed every second of every day. Everyone who drinks a Coca-Cola is able to share at least one thing in common: they have great taste!

My time at Coca-Cola’s headquarters in Atlanta, Georgia was a refreshing experience. I enjoyed the people, the building, and a limitless amount of Coca-Cola products in refrigerators strategically placed within a couple arm lengths from each other. The office creates an inspiring and motivating place to work. It reflects the values and culture of the brand everywhere you look. The people of the company make the magic happen as they refresh the world while staying dedicated to living out the values of Coke.

Michael revealed the vision, innovation, and passion of what it looks like for the people of the company to be the brand. Also, Michael upheld qualities such as caring, sharing, connecting, integrity and excellence. You better believe I savored every moment of being at the Coca-Cola headquarters.

“I can’t control what happens in certain situations but I can control how I react.” ~ Michael Moore

“Believe in what you’re doing and the company you’re working for otherwise it is just a paycheck.” ~ Michael Moore

“As a people person I’m always of the mindset that people are the most enjoyable part of my job.” ~ Michael Moore