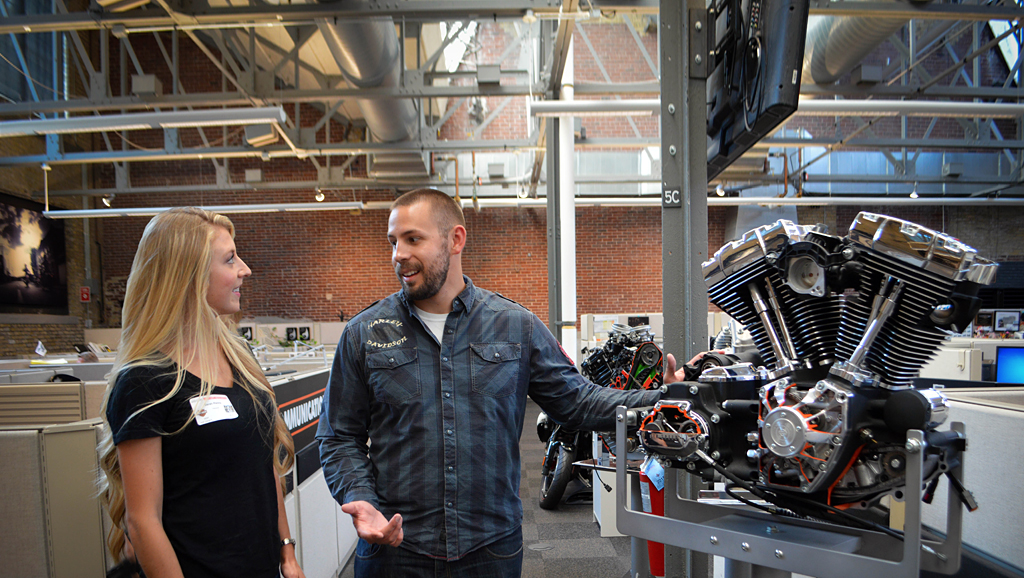 Harley Davidson sells more than motorcycles — they sell dreams. You don't have to ride a motorcycle to enjoy Harley Davidson and what it stands for: Freedom, adventure, individuality, and legend. The bikes are made in America, but the company brings the experience throughout the world. It began when Dan Wolf, sales and marketing development associate for Harley Davidson, came across my Instagram page and left a comment on a recent picture asking if I would be interested in shadowing someone who works at Harley Davidson Headquarters. Without knowing much about the company and nothing about the person who reached out to me I said “yes” and began my journey to Wisconsin. That simple “yes” allowed me to take a ride that will always be remembered. I was able to shadow Dan Wolf (a man who embodies the brand), meet Matthew Levatich (the CEO of Harley Davidson), and see Willy Davidson (the face of the company).

Dan Wolf wanted to jumpstart his career so he revved up his resume and went to the career conference as a sophomore in college. He saw the Harley Davidson booth and knew the program they offered was highly competitive. The intern positions normally went to upper classman but that didn’t stop Dan from talking to the Harley Davidson representative. Dan saw the man was from Tomahawk, Wisconsin and started up a conversation by asking how the fishing was in his part of the world. After talking a few minutes, as Dan was getting ready to leave, the man asked for his resume. The next day he got interviewed for the co-op position at the manufacturing plant and got the position on the spot. The same man who Dan started up a conversation with ended up being his boss in Tomahawk.

“There is no more powerful influence on your work or life than the people you surround yourself with.” ~ Dan Wolf

While in Tomahawk the company was extremely impressed by Dan as an intern and asked him to work full time. He decided to take a semester off school to do the job. Together, they drew out a road map for his career with Harley Davidson. Dan now gets to travel the world while helping market bike rallies and other company-sponsored events during the year. I was able to hear about some of the roads he’s been on as we met for lunch at the Motor Bar and Restaurant by the Harley Davidson Headquarters.

As Dan told us about the freedom he found in the company, Willie G. Davidson, the grandson of one of the founders, sat across from us. Willie is the head of the design department and the artist behind some of the most striking Harley Davidson Bikes out there. He gets much of his inspiration from his rides, which he turns into watercolor paintings depicting Harley-Davidson motorcycles. These images showing the brand’s imagery is then turned into bikes so beautiful they should belong in the Harley Davidson museum along with Willie’s watercolor paintings. Willie shows true leadership as he comes into his office every day with no air about him. Dressed in black leather and beret, Mr. Davidson, blended in with the iconic brand.

As we went into the headquarters Matthew Levatich, the CEO of Harley Davidson, and Tchernavia Rocker, the VP of Human Resources, welcomed us in to their office. It was unique seeing how accessible the top executives made themselves to everyone in the company. They took an open door policy to the next level by not even putting a door on the frame of the entrance to the office. They told me about their non-traditional route to brand excellence and how almost everyone in the company rides their bikes to work. They use those same bikes to journey to Harley rallies together as they focus on providing the best Harley Davidson Customer Experience (HDCE) by looking through the eyes of the consumer. It was easy to see that Harley Davidson’s culture is as strong as the iron and steel they put on their bikes.

Harley-Davidson has been able to build a community of enthusiasts around its brand from all different backgrounds that range from CEOs to recent college graduates. The trademark brings them all together and gives people a reason to "belong." They gave me that sense of belonging as I got to visit their headquarters and allowed me the opportunity to continue my journey with them by getting my motorcycle license through the Harley-Davidson Riding Academy. Ride on!

“Learn from your experiences and take them into everything you do.” ~ Dan Wolf

“The opportunities that really make you grow only come up a few times in life, don't let them pass you by.” ~ Dan Wolf

“You never know what person you interact in the company is going to help you out in the future.” ~ Dan Wolf

“The relationships you make along your personal and career journey contribute the most to your success as a person.” ~ Dan Wolf

“Be open to life and all its possibilities, willing to take the next road that comes up.” ~ Dan Wolf

“I was born with gasoline in my veins and a crayon in each hand.” ~ Willie G. Davidson