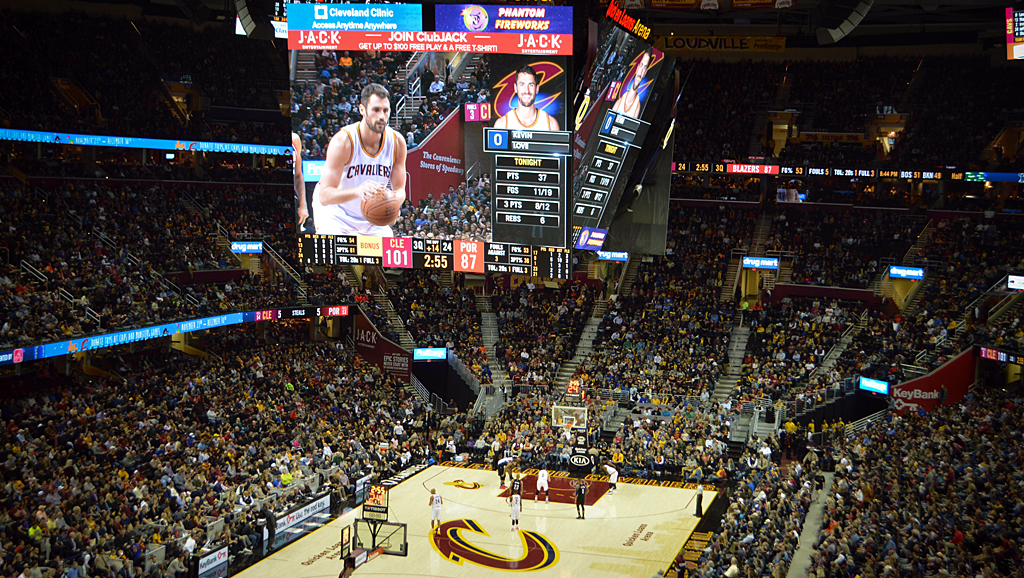 “Believeland”. Despite facing teasing in national headlines for over five decades the city of Cleveland never stopped believing in the Cavaliers. And, in 2016, their faith paid off when the Cavaliers made history by winning their first NBA Championship title. The team was up against the defending champions, the Golden State Warriors, who had defeated them the year before. The Warriors had played an almost perfect season with a historic 73 game wins (most ever in the NBA) while the Cavaliers had a harder time securing the court with a topsy-turvy season, which included a coaching change and talk of a lack of chemistry among the players. The odds seemed stacked against the Cavaliers but the King, LeBron James, led his men to dethrone the defending champs in a 93-89 game victory over the Golden State Warriors. After 20 lead changes and 11 ties the Cavaliers kept the Warriors from capturing what truly mattered, the Championship! Once again the King reigned over the court!

The Cavaliers earned the franchise's first NBA championship, broke the city of Cleveland’s nearly 52-year-old curse, and became the first team in the NBA to battle back from a 3-1 series deficit to win the Finals. When the team charter plane landed at Cleveland Hopkins International Airport, the Cavaliers were greeted by fans numbering close to10,000. This number only grew as it carried through the week to a four-hour parade. A crowd of approximately 1.3 million people packed downtown Cleveland, spilling off sidewalks into the streets, filling rooftops, standing on sign posts, sitting in trees, peering from bridges, squatting on top of portable toilets, and hanging out of office building windows all in hopes of getting a glimpse of the heroes who returned home after putting an end to the 52-year title drought. The highlights of the parade included LeBron giving a moving speech, MGK doing a pull-up on a signpost, JR Smith taking shirtless shots on fans' phones, and Kyrie letting random people onto his float to take pictures. On one of the floats amongst the players was Brendon Yu, Basketball Operations Special Projects, for the Reigning Champions, the Cleveland Cavaliers.

To get a glimpse of how the team was built and how the Cavs operate you have to go to the front office where Brendon works. It’s the team behind the team. They are the ones who hand selected each player based on the chemistry, work ethic, character, passion and basketball IQ in order to get the best talent possible. They have helped make the Cavaliers into champions by building a group of players who compliment each other on and off the court in a way that would get them their title. Brendon scouts at the college, D league and pro levels. He also helps the in house analytic staff and salary cap gurus that contribute to the success of the Cavaliers. So how did Brendon Yu score a job with the best team in the NBA?

Like most players, Brendon started early. At a young age he played basketball and knew he wanted to make a career from his passion. In high school he transitioned to student manager of the varsity team and later coached the freshman team as a senior. He then went on to student manage the men’s basketball team at Indiana University for 4 years while he got a degree in Finance. Along with his degree, Brendon gained a variety of experience doing video, analytical, and Excel work for the Men’s basketball team that helped him build a strong resume.

After graduating, he pivoted from coaching to the front office side of the NBA. Brendon explained to me the difference between coaching and the front office is winning a battle versus winning a war. As a coach you are trying to win a battle every night and plan your strategies for each game. While in the front office you have to have a long-term perspective on figuring out which players are going to help win the Finals. Brendon set out to find how he could do that.

The NBA has 30 teams that might only have one internship open in the front office. About 200 resumes are sent to each team, competing for that one spot. Brendon went to Las Vegas and Orlando for the intention of networking at the NBA Summer League, which is an off-season season pseudo tournament where the teams typically consist of rookies, second year players, and unsigned free agents who are looking to get drafted. While at the competition Brendon reintroduced himself to people he had met that had come to IU to scout, and learned where his resume needed to be sent.

After interviewing with different NBA teams, Brendon was unsure of the outcome. He was about to accept a job working for the NBA in India when they Cavaliers gave him a call. He decided to take a shot working for the Cavaliers when they offered him a job late in the game.

Every day Brendon gets to do the job he loves. He works with a close-knit team of about 50 people made up of players, coaches, and front office staff. I was able to experience a little of what his job entails as I got a run down of the Cavaliers facility where the front office is located and the players and staff practice, workout, and eat customized food prepared by an in house chef. We then took a break to shoot some hoops on the King’s court and later attended a Cavaliers game where we watched the players dominate in a game from the staff suite seats. I have to admit; this job seems like a slam-dunk!

“I love the job, I get paid to watch basketball games, I can’t complain about that.” ~Brendon Yu

“It’s still a people industry of having a qualified resume and getting along with people.” ~Brendon Yu

“The sooner you realize this is what you want to do the better so you can get different kinds of experience.” ~Brendon Yu

“You have to put in the work to get to the place you want to be. You can’t just hope and dream.” ~Brendon Yu

"In Cleveland, nothing is given, everything is earned." LeBron James

“Don’t be afraid of failure. This is the way to succeed.” – LeBron James

“I think team first. It allows me to succeed, it allows my team to succeed.” – LeBron James