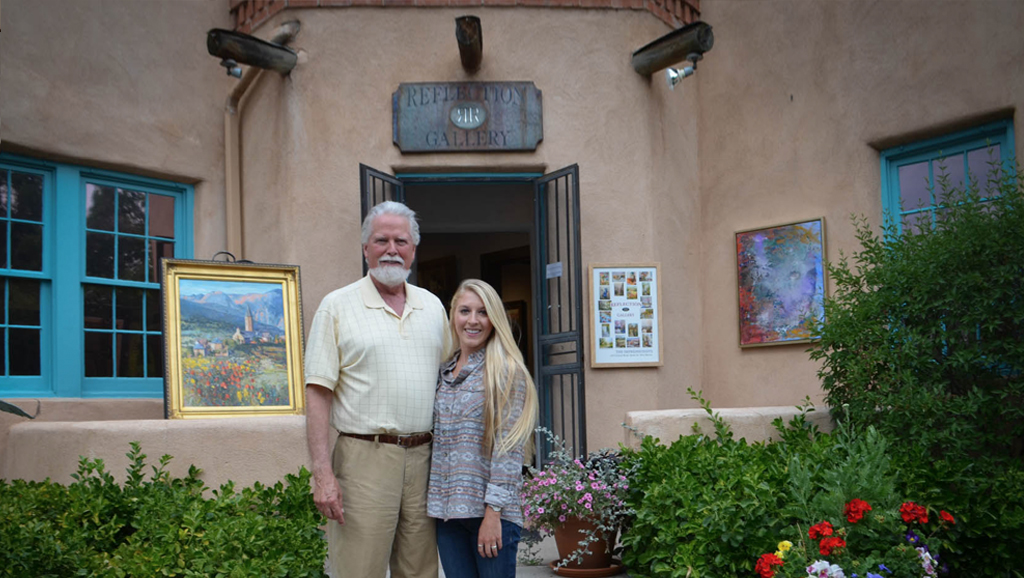 One of the world’s most sought after art gallery destinations, Canyon Road, is a street that stretches half a mile in the Historic District of Santa Fe, New Mexico. The street has a rich Native American history that captivates people’s love of art through the vivid colors in the paintings, sculptures, and fine arts displayed in the stores. Even the still-life art is moving! Located at the start of the road is the Reflection Gallery.

Founded by a man named J.D. Midwikis, the Reflection Gallery, is one that always draw in large numbers of people. Like his art pieces, J.D.’s life has had many colorful paths. While he was attending college at Louisiana State University. J.D.’s parents sent him his sisters tuition money to pay for her first semester of college. As a typical college aged boy, he saw it as beer money for him and his friends. Although, he took it a step further when he used the money to make a down payment on a bar. Even though at the time he wasn’t legally old enough to drink that didn’t stop him from brewing up a good idea. By the time tuition was due, he had made the money back and sent his sister to college without his parents ever finding out. From there J.D. dabbled in many other pieces of work such as the rock and roll business, the army, apparel industry, and boating business.

“There’s an expression in this country ‘Throw something against the wall and see if it sticks.’ That’s what I’ve done my whole life.” ~ J.D. Midwikis

After hitting a billion dollar deal for Costco, J.D. retired at the age of 40. At the time he was living in a beautiful log home in the mountains of Aspen, Colorado with his Harley Davidson and golf clubs. It was there that he started becoming interested in art. He then began to travel the world looking for unique pieces in countries such as Russia, The Ukraine, China, Peru, Spain and more.

J.D. came back from his journey with a new boldness, creativity, and spirit. A friend of his who was an artist from the place he grew up in Louisiana encouraged J.D. to open up a gallery in Santa Fe where his taste in art would thrive. J.D. came to the area in 1971 before the Historic Canyon Road was famously known as “The Art Street of the Southwest.” There were about 6 art galleries that grew into more than 300 galleries in 1 square mile. Although the competition increased, the Reflection Gallery stood out as a true masterpiece.

The Reflection Gallery has held up a great reputation for the original works of arts from painters and sculptors all around the world. Even artists will travel from distant places just to see if J.D. will carry their work. The last well known artist to enter the store was Taras Tabaka from The Ukraine. He just showed up - no email, no call. He came to J.D. because he knew that that the Reflection Gallery was known in The Ukraine for carrying some of the most respected painters’ works. There is no wonder this small adobe gallery is making a large gross sales of over a million a year.

I was able to learn a great deal about the entrepreneur mindset and taking advantage of opportunities around us. Sometimes we have to go out into the world and find answers for ourselves. The Chinese symbol for danger is the same symbol used for opportunity.

So we need to start pressing into things that excite and maybe even scare you a little. It may lead you to the most beautiful picture.

“I wasn’t a painter, I’m not an artist, I have no education in art. I just learnt and built upon what I enjoyed and was good at.” ~ J.D. Midwikis

“The only time I ever worked for anybody was when I was drafted, I worked for Uncle SAM, he was my boss.” ~ J.D. Midwikis

"Every industry is a lot smaller than you think. Once you know a few people you will find you know them all.” ~ J.D. Midwikis