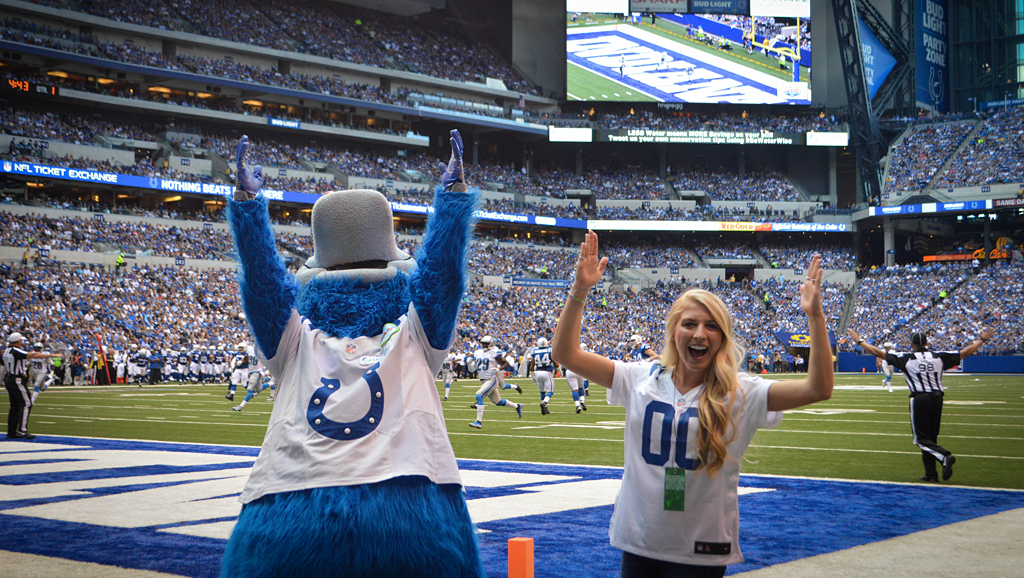 Official Mascot for the Indianapolis Colts

I had the best time getting to horse around while shadowing Trey Mock! As Blue, the Indianapolis Colts mascot, Trey was presented with the NFL’s Mascot of the Year Award in 2016. He has also opened for Jimmy Buffet, performed in a military tour through Japan and Hawaii, and was the first mascot to receive an official blue check mark on twitter. Even though Trey’s fieldwork is exceptional, it’s what he does off the field that is outstanding. On top of the hundreds of events that Blue takes on each year, he is involved in multiple philanthropic endeavors, performs free for schools in the state of Indiana, visits children in the hospital regularly, and has recently written a children’s book.

Trey was first interested in becoming a mascot when he attended freshmen orientation at Auburn University. The roar of the pep rally and the blare of entertainment welcomed him to his new school. Among the noise and craziness, Trey focused on the mascot as he found Aubie the Tiger to be extremely creative, hilarious, and athletic while performing a skit. When mascot tryouts came around in the spring, Trey decided to tryout even though freshman typically don’t make it very far in the process. Trey beat the odds and made it to the last round before getting cut. He came back his second year and got the position as Aubie the Tiger. What Trey didn’t realize was he was walking into the number one mascot program in college sports. Trey went on to compete in the College Mascot National Championships and won first and second place the two years he performed as Aubie the Tiger.

“What makes my work meaningful is knowing the character and legacy we have created through Blue will continue long after me.” ~ Trey Mock

Two semesters shy of graduating college, the Atlanta Falcons reached out to Trey about possibly stepping into the Falcons suit when their current mascot was about to retire. Trey knew his window of opportunity was limited and decided to take the offer. For some reference, there are 32 teams in the NFL, of which 27 teams have mascots. The Kansas Chiefs mascot is going into his 27th year and others have been known to follow his footsteps. The Falcons mascot realized how hard it was to get out of the suit and decided he didn't want to retire after all. This led Trey to take another opportunity auditioning for the Buffalo Bills mascot position.

Tryouts for an NFL mascot typically include a skit performed in a costume, an impromptu portion where they have to react to random props being thrown at them, a section where they respond to different scenarios the judges create for them (such as the team just scored a touchdown or there is a scared little girl), and a formal interview done in suit and tie where the person trying out has to talk about the business portion of being a mascot. Each person coming to an audition has to bring with them a huge bag filled with all the skit props, suit, and business plan. While flying to Buffalo, Trey’s plane stopped in Washington D.C. and as the plane continued on, his bags did not. Trey got to the airport with nothing but what he was wearing which was jeans, a polo shirt, a baseball undershirt, and sandals, all while sporting a Mohawk hairstyle! He tried to change the tryout to a later time but they judges didn't budge. So, very last minute, Trey came up with a skit with the props that were around him and interviewed with what he had on. Trey left the audition thinking it could not have gone any worse but got a phone call saying he got the job.

After being with the Buffalo Bills for a year he questioned if he was supposed to be a professional mascot and decided to go back to Auburn. He enrolled back in school and two weeks before summer classes started got a call from the Indianapolis Colts. They were creating a character in a brand new program and asked if he would be interested in trying out. Trey thanked them for the opportunity but politely declined. Although, the day before the deadline to apply, Trey felt he had made a huge mistake and needed to try out for the position of the Colts mascot. It was already 6pm and everything was due in the morning. Ging up against time, Trey quickly pulled together his highlight video and resume and drove it to the Atlanta airport to make it on a FedEx flight to Indianapolis. Luckily, Trey got an in person interview and this time carried his bag to the tryout. From there he scored the position of the Indianapolis Colts’ first mascot.

When Trey tried out he made an eight page business plan of how he was going to make the best mascot program in the NFL. The executives loved everything except the fun, goofy character Trey had sketched out. Trey smashed all the expectations of having a mascot portrayed as fierce as he finally got the point across that with a rough and tough mascot they would be scaring away their number one demographic; children. The NFL did a study that by age eleven it’s hard to change someone’s brand loyalty as they grow into an adult. With being told he had a year to prove himself, Trey took his original sketch of Blue and went up to Montreal, Canada. He sat in a room with sewing machines, plastic eyes and fabric from floor to ceiling, with five French-speaking women, as they created Blue. Thirty minutes before Trey left Montreal, they cut out fabric for a mouth that he could see out of and finished the last stitch just before he headed to the airport.

Trey decided to debut the costume by skydiving out of the blue for his first official appearance. A googly eyed, seven feet tall, electric blue character with blowers coming out of his nostrils, and a mane flowing in the wind was an instant hit! Since then Trey has continued to make the jump blindly through faith in all he does. One of these times helped him land a wife. Trey’s first year as Blue was also his wife’s first year as a Colts cheerleader and since their initial connection have spent every year together. They now have two beautiful children who sometimes dress in a kid’s size suit of Blue and join their dad for a game.

Along with being Blue, a husband, and dad, Trey finds time to be available to five different non-profits where he is able to use his platform as Blue to lead others. He also gives back through what he has been blessed with in finances. Trey and his wife recently felt they needed to down size from the beautiful 5200 square foot home they had recently built so they could offer more for God’s community. The profit of the sale from their home was tithed to their church and put towards providing Christmas for 6 underprivileged families this December. As Trey pours out to others it seems more blessings pour into his life. One of the Indianapolis Colts sponsors, Olivet University, found out Trey had not been able to finish school when following his calling as a professional mascot and granted him a full ride in order to get his degree. Trey is now about to add one more thing to his already impressive resume: a college degree.

I got a kick out of joining Trey’s work on and off the field. I was welcomed into the Blue Crew family as I helped with one of the Colts fun and educational school programs and attended an Indianapolis Colts game. I was able to watch Blue entertain the crowd from the sidelines of the field. Then I got even more involved in the game by accompanying Blue in a golf cart as he shot Colts shirts into the stands. I was so distracted by Blue's entertaining skits and the way he interacted with the crowd that I, along with the fans, had trouble focusing on the game. Blue has what you would call the Pixar effect: adult humor that is still appropriate for kids but engaging for both.

It is evident to see the way Trey lives his life as the man behind Blue is influenced by God guiding him. Trey continues to pour out as his accomplishments pour in and he stays completely humble through it all. I am encouraged by his ability to give so much of his time and energy into his job while still impacting the community in ways larger than his character. Blue’s football jersey may read 00, but he is #1 in the hearts of many!

“If you can make a person forget even for a moment that there is someone inside of the suit, and just see that character, than you’ve won.” ~Trey Mock

“It pays off to follow blindly with faith.” ~Trey Mock

“Since a mascot can’t speak you should have someone who can speak to anyone- doesn't matter the language barrier.” ~Trey Mock

“Everything we’re given is given back.” ~Trey Mock

“The biggest ability that God wants to use is our availability.” ~Trey Mock